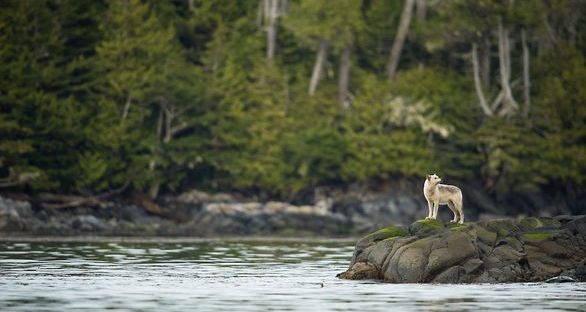 Heading off to University to study an undergraduate degree in Ecology, I was sure I’d chosen the coolest subject on offer. Admittedly I was a complete environmental nerd, so I understood that not everyone would feel the same way. What I was not expecting was that in my course there was a grand total of five people. In a University where some courses had hundreds, this seemed a little odd. Then, I started to realise that when I mentioned my course to the biologists, environmental scientists and geographers, a common reaction was “Cool! So what actually IS ecology??”. On reflection I realised I too had never heard of ecology until I’d read about it in the University guide before applying. Despite its lack of fame, in my (highly biased) opinion, ecology is one of the most important parts of the environmental/biological world. So here I’m going to tell you what it is, why it’s great, and how it can teach you about how a handful of wolves can change the course of an entire river.

So what is it?

Imagine biology and environmental science got together and had a baby. Well, ecology would be that baby. Biology is the study of life and living organisms including things like genetics, muscles, bones, hormones and evolution. Environmental science is generally more physical and less alive; looking at things like soils, weather, pollution and resource management. Ecology is when these two come together. It is the interaction between organisms, and between organisms and their environment.

To give an example, imagine you have a pretty bare and patchy back garden. An environmental scientist might tell you the climatic conditions in your garden are ideal for the growth of flowers. A biologist might tell you that when the leaves are removed from these flowers, they can no longer get energy from the sun and grow. This is when the ecologist on site will inform you that despite the suitable conditions for the growth of your prize winning marigolds, a rogue sheep has been in your garden nibbling away at the leaves so often that the flowers have died, which is why your garden is bare. Just for continuity this is where your nice farmer-neighbour might come and apologise for the rogue sheep and your local garden centre may remind you that their sale of potted plants is STILL ON.

Where do the wolves come in?

Ecology may not sound super thrilling when talking about sheep and marigolds. However, it starts to get pretty cool when you learn that through the interaction of wolves with other animals and the surrounding landscape (*cough* through ecology *cough*), they can actually cause rivers to change course:

In the early 1900s wolves disappeared from Yellowstone National Park in the U.S. As they were no longer there to hunt wildlife, the elk population exploded overrunning the area. Then in 1995 a small group of wolves were reintroduced to the park. This lowered the number of elk through hunting, but interestingly it also changed their behaviour. The elk learned to avoid open areas like meadows and valley bottoms as this was where they would get hunted easier. Because they avoided those places, the plants there wouldn’t get eaten as often, and so more seedlings would start to survive. This attracted more animal species like otters and beavers to the area.

As these seedlings grew into bigger grasses and trees, their roots held the soil around them together better and stopped the ground from being eroded away by the rivers. This, combined with the new beaver population building dams, eventually led the rivers to start to change shape too, twisting and turning further from the new forests and slowing down into pools at the beaver dams.

This is an example of a trophic cascade – when a powerful interaction has a trickle-down effect on an environment which can cause a whole ecosystem to change. Now of course this doesn’t mean that if you add a wolf to a new area the landscape will automatically change in this exact way. Nature is incredibly complex and unpredictable, and these changes in Yellowstone didn’t only happen because of the wolves. Things like human hunting and growing bear numbers also affected the number and behaviour of the elk, as did a few years of poor weather around that time. In another place without this extra hunting and bad weather, who knows how the environment would have reacted to some new wolves.

The Yellowstone story shows you what can happen when you add an animal to an ecosystem, but big changes can also happen when a critter is removed. Sea Otters (informally re-labelled by me as ocean pompoms) in Alaska were hunted to near extinction in the 1900s for their pompom like fur. Normally sea otters eat sea urchins, but with all the otters disappearing the urchins were thriving. The urchins acted like, well, urchins, and with their soaring numbers started to eat everything around them, creating almost an underwater desert. This included destroying the kelp forests which if you have never seen a photo of a kelp forest, I recommend you do because they honestly look magical. This story does have a happy ending though. People stopped wearing otter, the otter numbers slowly came back, these otters gorged on urchin (wow that really does sound unappetising…) and the kelp forests were able to regrow. Success!!

The natural world isn’t static. It is constantly adjusting to who is there doing what, where and when. The changes can be predictable, but are often totally unexpected which is what makes it so exciting and interesting to study these interactions- this ‘ecology’.

Now, at this point I know that as eager new converts to the “I love ecology” club you may be looking for ways to quit your job and study nature forevermore. Well, let me save you some paperwork and tuition fees. Instead you can just follow this blog which I will try to update weekly with all things nature, science and Arctic related. If there is anything within that which you find particularly bemusing, feel free to drop me a line on the webpage and I will see if we can explore that topic in a later blog post.

Thanks for reading- toodles!