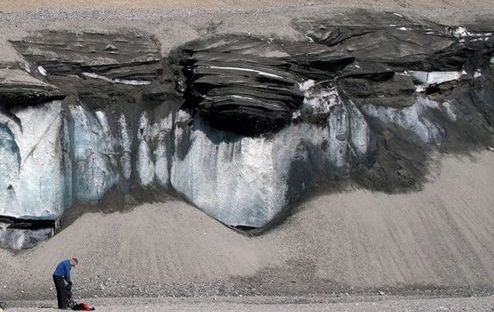 I love it when two words are shoved together to create a very accurately descriptive new word, which is why I’m committing to calling this podcast/blog a plog. I held off before because plogging is already a thing (jogging and picking up plastic along the way), but words can have two meanings right? Anyways, I’m taking it.

Another very simple and descriptive word is permafrost. Without being a geographer anyone can guess that permafrost is, well, permanent frost. Sadly, the word is perhaps a bit outdated as it turns out this frost may not be as permanent as we once thought. This week we’ll be looking at what permafrost is, how we’ve made mistakes in the past by thinking it’s permanent, and what is happening to it now. Oh, and a deadly mummified reindeer will also be included. Enjoy!

What and where is it

If we are being more specific, permafrost is soil or rock which is frozen for 2 or more years in a row, year round. This means that any liquid in the ground is frozen, though it doesn’t necessarily mean that the land above it is frozen or covered in snow all year.

As I hinted towards earlier, we speak of permafrost as if it’s permanent but it turns out a lot of what we thought was permanent is, well, not.

In 2008 a giant vault was built on the northern island of Svalbard. In this vault was put seeds for important food crops with the idea being that if some kind of apocalyptic global disaster happened, we’d have some seeds stowed away to use in agriculture when attempting to rebuild humanity. This vault was built deep into the permafrost as it was thought that here it would be safe from “the challenge of natural or man-made disasters”. Emm… they were wrong. A few years later with generally rising temperatures in the Arctic combining with an unusually warm year, the snow and ice melted and the vault got flooded. The water didn’t reach as far as the seeds luckily, but the fact that this apocalypse-proof vault’s protection had just melted away was a little worrying to say the least.

As the average temperature on earth and the number of unusually hot year’s increases, permafrost is starting to melt in many places. A dramatic example is the Batagaika crater in Russia which is a 1 km long, 100 m deep crater that can be seen from space. Oh, and it’s growing. The frozen water in it is thawing causing the ground to slump down without the support of the ice. This crater is so huge and dramatic that local folklore says it’s the connection between here and the underworld.

What is in the melting permafrost

Right, so ice is melting, so what? Well, there are a few consequences when things that have been frozen for a very very long time suddenly become not-frozen. Ice is an excellent preservative because it is too cold for bacteria to decompose whatever is in it. This covers last week’s leftovers in your freezer, but it also covers slightly older things too. In fact permafrost is something of a dream to palaeontologists as in most places all you can find of prehistoric creatures nowadays is bones, but in ice the flesh might not have had time to decompose so can be preserved. A very recent example is of a 40,000 year old wolf’s head found perfectly preserved in Siberia, and other permafrost finds have included foals, mammoths and ancient giant cows called aurochs. Having the flesh can teach palaeontologists so much more about the animals than just bones, like what kind of insulation did they have (Fur? Feathers? Nothing?) and what colour they were. Details like this are missing for creatures from warmer places like the T. rex, so there is genuine debate over whether the T. rex was actually covered in colourful feathers.

So melting permafrost can be good news for palaeontologists, but there’s also some bad news. If something is really well preserved, and is super hardy, it might not actually die… In 2016 a frozen carcass of a reindeer which died 75 years previously (not as spectacular as a mammoth but still!!) started to thaw in Russia. The reindeer was well and truly dead, but it turned out that the anthrax which killed it was not.

Anthrax is an often deadly disease caused by a bacteria (Bacillus antracis for those who are interested) and it can be passed on through cuts and grazes or even through the air. The disease from the reindeer carcass caused a further 1,200 deaths in live modern day reindeer and even caused 13 people to be hospitalised. If this one disease can be unleashed by thawing carcasses, could there be more?

That’s a bit dramatic, it doesn’t sound too bad still

The likelihood of lots of diseases suddenly being unleashed on humanity by thawing mummified creatures from the past is probably not insanely high, I’ll grant you. However, that doesn’t mean that all is good. On a less dramatic but more impactful note, there is lots of carbon and methane in permafrost. When it melts, that means lots more carbon and methane is released into the air. Both of these are ‘greenhouse gases’, the gases that are causing the earths weather systems and temperatures to change, so melting permafrost=more climate change. This can increase the number of droughts and famines, so really gases from permafrost have the potential to wreak much more havoc than zombie reindeer diseases. Who’d have thought it.

Not a merry conclusion really, but there’s a little whistle stop tour of permafrost and some of the problems surrounding it in terms of melting. It’s also not necessarily all bad. Melting permafrost means that more of the ground is ‘active’ (i.e warm enough for bacteria to do their thing) which could lead to more fertile soils for growing things, but this is an area full of complications and debate.

If we hop in to the ‘melting-is-bad’ camp, how do we stop permafrost melting? Well, we could stop the planet getting too hot by reducing the amount of greenhouse gases we pump into the atmosphere from other sources, which is your classic burning fossils fuels for energy and transport fuel, and methane emissions from mass livestock agriculture (cow farts aren’t that big a source of methane… unless you have tens of thousands of cows on an industrial ranch in which case those farts are going to do more than just create a smell…)

More and more individuals, institutions and governments are becoming conscious of this, and more importantly acting on it. Fingers crossed it works, as I’m sure much of the earth would rather not be sitting in a permafrost puddle in the future.

More about the vault: https://www.theguardian.com/environment/2017/may/19/arctic-stronghold-of-worlds-seeds-flooded-after-permafrost-melts